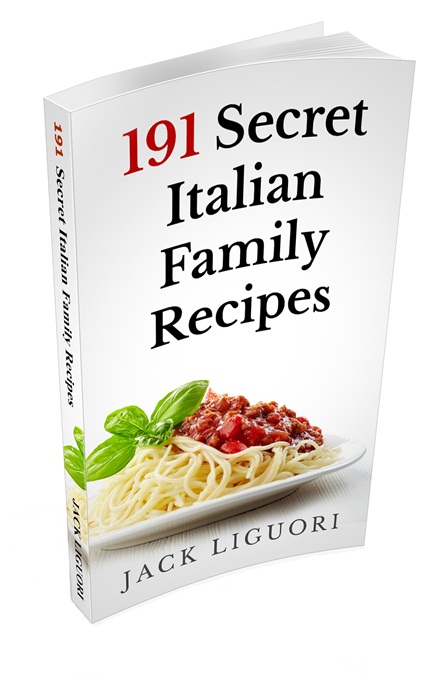 The History and Origin of the Recipes

During the last few decades of the 19th century and the early years of the 20th century many thousands of Italian left their native Italy in search of a quest for a better life in the new world.

Many, with little more than the cloths on their backs, and perhaps a few meager possessions, managed to scrape together enough money to buy boat passage to America… and with it a ticket to a new life.

Most were poor in material wealth … but rich in high hopes and enthusiasm … and all embraced a once in a lifetime sense of adventure!

Several hundred of those Italian immigrants eventually settled in a little Town of about 20,000 called Olean, nestled in what would later be called the ‘Enchanted Mountains’ of western NY State about 60 miles south of Buffalo.

As with most of the many varied ethnic groups immigrating to the US in those days they tended to congregate in one area of the places to which they moved. In Olean it was the ‘North End’.

The ‘North End’ was divided into two areas, separated by North Union Street, which was an extension of Olean’s main thoroughfare.

The area on the west side of North Union Street was where the Italians congregated, and the other section, to the east, was where the Polish immigrants grouped.

My dad’s mother and father came over from an area of Italy near Naples, and were part of the hundreds of couples and families that finally came to the end their long journey in North Olean. And there they raise a typically large Italian family of seven children (five sons and two daughters).

My mom’s folks came from the Palermo area of Sicily, and ended their long sojourn in the little railroad Town or Salamanca, NY … about 20 miles west of Olean.

Like most immigrants, the Italians who ended up in Olean tended to continue to live near one and other, where they could be among familiar circumstances, and together with people of the same religion (mostly Catholic) and customs … and most importantly … who spoke the same language.

In those days during which my dad grew up and got married, in the 1910’s and 20’s and 30’s, Italians were unfortunately sometimes though of by the rest of main stream America, as all being associated with the gangsters of Chicago and New York that were constantly in the headlines during the times of prohibition.

In those days Olean had so large a collection of really fine Italian restaurants that it rivaled any similar sized City in America for eateries serving excellent Italian cuisine.

During the 1950’s and 60’s the Italian ladies of Olean formed an organization called ‘Saint Ann’s Lodge’ … kind of like a more gentile and refined female oriented equivalent of the Christopher Columbus Lodge, but without an exclusively dedicated building of their own. They were more closely associated with St John’s and St. Joseph’s churches that were in and near the North End.

As the 20th century progressed after World War II, with ever growing mobility, more and more young Italian descendants moved away from Olean resulting in families becoming increasingly separated by distance… thus dispersing this concentration of Italian families … and the recipes for which they were stewards.

Luckily, in the 1970’s the ladies of Saint Ann’s Lodge … excellent Italian cooks all … decided to gather up into one volume as many of the unique Italian family recipes as possible … before they were all widely dispersed and possibly lost forever.

So, a concentrated effort was made to assemble, compile and print these numerous family recipes (sometimes one of a kind)from each of the members of Saint Ann’s Lodgeand put the mall into one booklet … and then to offer that booklet locally … using the proceeds to fund ongoing scholarships for some worthy students from the area … while at the same time preserving a large piece of the Italian culinary heritage that had been entrusted to these ladies for safe keeping.

Thus came into being the original matchless authoritative source from which all of the recipes in this new compilation originated.

The name of that original volume:

“Recipes from Italian Kitchens of Olean”

I’m sure that some of the recipes contained in this revised and updated work will be readily recognized … however, there are also many others which are truly one of a kind ’secrets’… carefully handed down as ‘gastronomic heirlooms’ by loving mothers in kitchens from all regions of Italy to their daughters … and their daughters for hundreds of years.

I hope you enjoy reading and buoyantly preparing these recipes as much as I did preparing and re-organizing them into this unique collection of 191 SECRET ITALIAN FAMILY RECIPES.