Heirloom Culinary, a kitchenware business based in Rushford, NY, which is famous for its multipurpose kitchen shears, has revealed that those kitchen scissors were actually designed by company co-founder Jack Liquori. Liguori, who is a retired pilot, has explained that his experience in flying had inspired him to develop the best products for the kitchen.

Jack Liguori says: "I am a retired pilot. When I retired, I wanted to continue to fly and I purchased a sports plane. Flying is in my blood and I can't live without it. Interestingly, it was flying that encouraged me to design the best kitchen products, including our highly popular kitchen shears."

Since their release, the scissors have won top rating from customers. This was the result of the quality and strength of the shears themselves, as well as their packaging. Both have been inspired by Liguori's love of flying.

For Liguori, the link between his kitchen shears and flying is very clear. When flying a plane, it is vital to have a tool that is able to handle all the different materials in a craft. A pilot may, for instance, get trapped in belts or other wires. A plane could break and need quick repairs. In fact, it is even possible for a pilot to find himself stranded somewhere, in which case he will need something for hunting and preparing food.

"A good quality, multipurpose cutting tool is vital in the belongings of any pilot," adds Jack Liguori. "I feel I have done that justice in the kitchen shears. I have also paid homage to pilots in the packaging of the product, which can in a silver satin lining box, or in a beige burlap box. Any pilot is familiar with burlap, which quite literally surrounds us wherever we go."

The shears have been found to be so strong that they can cut through many different materials, including cardboard wrapped in plastic. When using the shears, it feels like using something that can handle any eventuality, not just in the kitchen but in other parts of the home as well. Those who need more information can find more details here in terms of what the shears look like and what they can do. 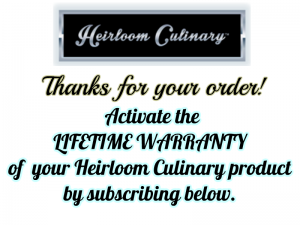 You have successfully subscribed to Heirloom Culinary

There was an error while trying to send your request. Please try again.